Last weekend, I was craving something sweet to serve for a Saturday brunch that was easy to make and wouldn’t make a mess of the kitchen.  I decided to try a recipe for cinnamon rolls that did not require yeast.   At first, I was pretty skeptical about not using yeast, and I was worried that without yeast, it would compromise the quality of the rolls.  However, these cinnamon rolls were perfect and my guests raved about them. 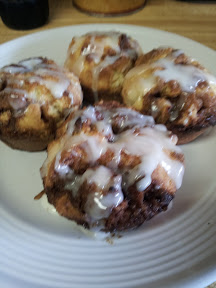 1 C. Light Brown Sugar (you can use dark brown sugar, per the original recipe’s instructions)

3 tsp. Pumpkin Pie Spice (original recipe calls for cinnamon, but I used what was available)

2 C. All-Purpose Flour  (make sure you have some more for rolling)

2 tbsp. sugar (the granulated stuff…no Sugar in the Raw, just rely on the Domino or whatever’s available)

2 tbsp. milk (or more depending on the consistency)

Prepare the filling:  Combine filling ingredients with a fork until a crumble like mixture is formed.  Set bowl aside.

Let’s work on the dough:  In a large bowl, whisk together flour, sugar, baking powder, and salt.  With clean hands (or that wonderful tool known as a pastry blender…man, I miss mine.  It got lost during a move), work the butter into the flour mixture.  Add the milk and egg, stir to combine.

Now comes the *fun* part:  Roll the dough out onto a floured surface into a large rectangle.  Sprinkle the filling over the surface of the dough (make sure it’s even).   I promised you the fun part, which is roll the dough into a roll.  Cut the rolls into 12 pieces.  Place the pieces into the muffin tin.  Place in the oven and bake for 20-25 minutes.

While the rolls are baking, let’s go over the glaze.  It’s easy peasy to make this glaze.  In a small bowl, combine the sugar, milk, and vanilla.  Stir until the glaze turns into a frosting consistency.   After removing the rolls from the oven, move the rolls onto a plate, then drizzle the glaze over them.

Totally yummy and the kitchen…well, it was a bit messy!  Cleaning is the fun part of cooking, right?